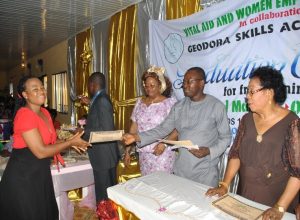 Poverty as a driving force to migration is a clear and easy notion to capture. The observation that poverty is one of the major driving forces behind the unprecedented migration of people from poor to rich countries is no longer disputable.

Some people from undeveloped countries migrate in attempt to escape from poverty and its related consequences such as insecurity, violence and instability. In brief, poverty in its various dimensions is at the center and one of the major root causes of migration problem. It is also a fact that this unending impetus compels people to migrate to developed countries which have grown into a clearly daunting phenomenon for both countries of origin and destination.

So far, consensus has been reached that no amount of repressive measures will be capable of overcoming this problem (IOM 20015). Instead, it is important to institute policies and initiatives that respond humanely to this challenge, for example, encouraging the departure from extreme repressive measures as a means of overcoming migration crisis and rather start promoting smart initiatives that builds people and their communities.

Investing in people in their communities in Africa will make Africa a better place, for instance education for children and empowering women entrepreneurs in some selected African regions known for trafficking and mass migration. This will reduce the push factor to migrate.

For long-time women have remained invisible in studies on migration. Their socio-economic contributions and unique experiences have not been considered. As far back as 1960s migration theories often assumed that most migrants were male, and that women were merely wives and dependents who followed their husbands. Consequently, migration was portrayed as purely a male phenomenon. Yet, women have always been present in migratory flows

A growing number of current studies on the issue are highlighting the way that women are moving independently of men as skilled workers, entrepreneurs and traders. Professional women, especially female nurses and doctors, now increasingly are engaged in international migration often leaving their spouses at home to care for the children, thus creating new orientations in gender role changes within the family.

On the other hand, women from poor environments who have experienced lack of opportunities and violence are likely to find themselves in all kinds of exploitative situations where their rights are being violated. They become easy targets for traffickers, who promise them a richer economic and social future abroad whilst luring them into forced labour, in most cases forced prostitution, sweat shops and inhumane domestic work conditions.

Migration can contribute to gender equality and empowerment of women by providing women migrants with income and status, autonomy, freedom, and the self-esteem that comes with employment. Women become more assertive as they see more opportunities opening before them. Moving to a new country exposes woman to new ideas and social norms that can promote their rights and enable them to participate more fully in society. It can also have a positive influence on achieving greater equality for them in their country of origin.

Vital Aid foundation is pro-active in providing crucial services for migrant women and educating them on their basic human rights under international law such as convention on the Elimination of All Forms of Discrimination Against Women (CEDAW, UN Resolution 1325 and the Beijing Platform for Action.

We are also committed to supporting initiatives that prevent trafficking and exploitation in the Netherlands and selected African countries namely Nigeria by:  creating greater awareness of issues of sexual and gender based violence or trafficking patterns through education, research, training and outreach, engaging with and empowering  women at risk of trafficking such as vulnerable children, women

BE PART OF THE SOLUTION:

Please make your contributions or donate to the cause of empowerment and rehabilitation of distressed migrants especially those who would like to return to their country of origin. Areas of interest

migrants, asylum seekers and domestic workers. VAF also provide socio-economic initiatives to help overcome those factors of vulnerability that lead to patterns of trafficking and exploitation.